As we peacefully observe the $ 32 crab omelet that was served by blue waitress in blue rubber boots in a one Michelin starred restaurant in Bangkok, a rat rushes through the restaurant’s terrace. We’re just a little surprised, but we think maybe it’s a trained one and this is part of the show. 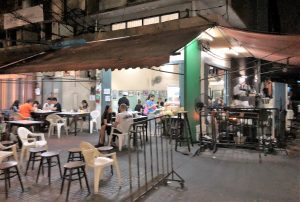 Fay Jai what translates to Aunt Mole is a one starred restaurant in the 2018 Michelin guide, first published in Thailand. I am wondering what the otherwise rigorous Michelin inspectors felt here who are accustomed to luxury food and setting while waiting for their salad? I guess you could see the fear on their faces and they might have prayed silently not to get diarrhea here or wishing not to go to the toilet. The toilet is not up to high standards here.  But this is not uncommon for street food restaurants in Bangkok. What is uncommon that they get a Michelin star. Jay Fai is one of the hundreds of thousands of Bangkok street food places but the only one to have a star. 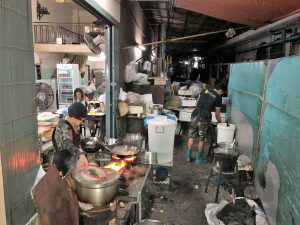 Kitchen in the street

If you walk by the place and you do not know it is famous, you will not notice anything special, it does not stand out of the rest. It’s a bad looking, crunchy place, a place that would be closed by an ordinary western food safety inspector without hesitation. Dish washing is done on the sidewalk, in large pots, without running water. They storing food next to it, also on the street. The cast iron stoves they use for cooking are also on the street in the corner of the restaurant so everyone can see it because it’s the attraction here. It’s kind of dirty show kitchen style. 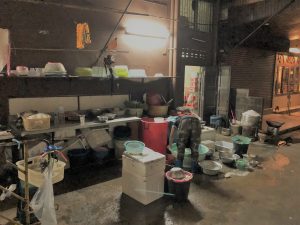 The first major difference you realize if you get in is the price. While an average street food stand can serve a meal for 1 USD here is a salad is 15 and the main attraction the crab omelet is 32 USD. That the average price for a one starred restaurant in Europe.

How is it possible that a ravaged street restaurant with rats running on its terrace will gain world renown and Western gourmet tourists will not miss out a visit if they come to Bangkok. Jay Fai became mythical. It has become part of urban mythology of Bangkok, although it has no web site, no booking system, no logo, no uniforms, they use the cheapest kitchenware, the menus are crumpled in greasy plastic bunks on the table, and the waiters don’t speak English. It has a single phone number that no one ever answers, though it is rigorously written in several places. There is no sales, no marketing strategy, and no image elements. Except for Jay Fai the chef.

You can have a table in the restaurant in two ways. You come in the morning, signing up for the day’s list, which is not for a certain time, just for the queue. You wait four to six hours and you immediately get a table and you wait one more and get food. The other way is that you sign up for another day for a certain time. Generally, in 5 to 10 days. We got a table for next week at 10 o’clock in the evening. 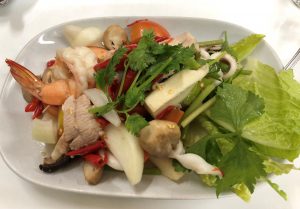 You have to choose food in advance, but as they have a certain amount of raw material a day, you may not have what you wanted. This is what happened to us. And despite the reservation time we had to wait an hour to get food. During waiting time you just sit and stare at the show and the rats that I’ve mentioned. No wine list, just hot beer, water and soft drinks at a price like in the most expensive luxury restaurants. 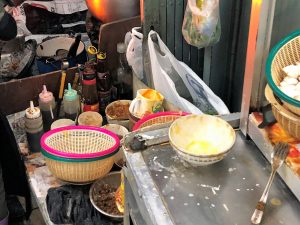 The eggs scrambled in this dish for the famous omlett 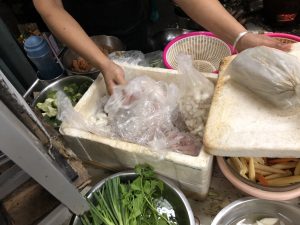 The show, however, is fantastic, most of the western guest are really surprised and they look at it like watching aliens. Jay Fai, the old Chinese aunt with a mole on her face (where the name comes from), really looks strange and unique. She is in purple heat-resistant boots, wearing pilot goggles, standing in front of the open fire like a weird Greek god. The fire is made with coal, which most Western tourists probably never seen before. The temperature is controlled by a fan. When she wants more heat she turns it and off when needs less. All the pots that they use are unbelievably dirty compared to western restaurants standards. There is no cooler, fresh crabs and other ingredients are kept in a glass cabinet or in a polystyrene box. All this in the middle of the restaurant right in front of your nose. 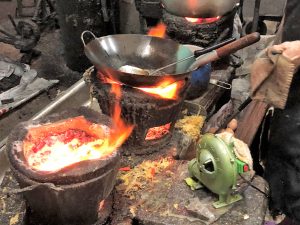 The fan to control the heat

Those who come for the Michelin star and the food can easily be disappointed. The public of the average starred restaurant, where not only food, but also exterior atmosphere, service presentation matter, will be shocked. This is seen in the comments of various forums. The 5 hours wait, the $ 32 price of the omelet, the quality of service the dirt makes many disappointed. And if we want to be frank they have a point. The food is, of course good and fresh, as the most devoted believers can bring it as a single argument, but in an omelet that has nothing but spice eggs and crab, not much can be spoiled. The place is full of canned things, just like you see in the 1 USD street food spots, they do not make sauces based on special recipe cooked for 3 days. They use what everybody uses in Asia. Here, you have to come for the myth, and if you do, you will get what you wanted. You get good food and a great experience, a show that you can tell at home. People then envy you and look at you as a person who is brave enough to go for special experiences.

Jay Fai is not famous because of the Michelin. She got the star because she was famous. European gastro celebrities had been visiting here. 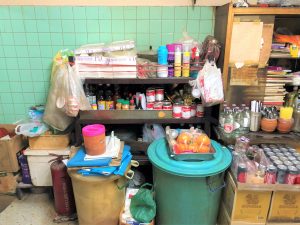 These are the ingredients used

They regularly came to cook together Jay Fai, featured shows and written about it. Michelin just put the seal of the gastro-church onto the myth. Myth is the aunt. Who has been pushing the show for thirty years with the same enthusiasm, a job that most of us would not have for a day.

I suggest you visit her because it is a special experience. Come for that not for the food and you will not regret it.

The bill for 4 person

There is a relatively new restaurant in Budapest leaded by a chef Krisztián Huszár who  already showed his talent in the past. This is his first “real” restaurant of his own as far as we know and its a hit in every aspect. Hard to overestimate not only the quality of the dishes but his very individualistic but consistent style. If we say it is a fusion kitchen we misleading the readers. Fusion for most people meaning today someone is not creative enough so mixing Asian taste to European dishes. This is far far away from that. His dishes are not reminiscence of well known old ones. He just uses tastes and styles. Takes the raw material and recreates it in a more edible form without the boundaries of the past centuries but using the experience of the past centuries. You think we are bias or in a too poetic mood but actually we were really amazed. We visited three times so we are not writing based on first experience. We tried different kind of menus and it never let us down. 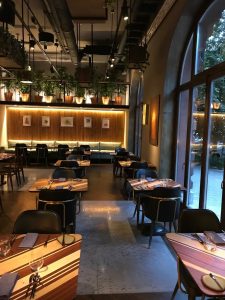 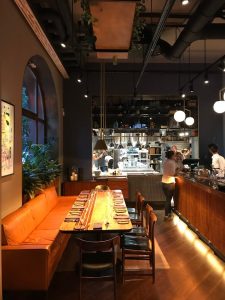 The design of the restaurant itself is very clean with lots of wood and simple colors which makes it warm and friendly but surely very elegant. The large portal windows compensate for not having a terrace. We have to say even though it is good to sit outside and surely it is good from business point of view this kind of kitchen does not need a terrace. Many of the worlds fines cuisines do not have terrace.
The best word to describe the food is ethereal. All the dishes have some kind of lightness not in the meaning of low calories but in an artistic way which is better described with the word ethereal. Even the raw beef or cheek of the pig seem to be light. Like this meat here.

He is using mostly fish and vegetables but luckily you find good meat dishes too. The chef is not a conservative guy and a relentless creator. Maybe the word maniac could be used too. You will not find “classics”. He is changing all the time based on what raw material he gets and maybe mood too. After this you might find strange if we say it is not an overcomplicated kitchen. We would even use  the word simple. And this has nothing to do with how the food made or composed. It can be done on the most sophisticated ways and can include several tastes it still seems so simple.Not a lot of fuss just good food.
He servea you even so unorthodox food like carp which could not be imagined in Italian fine dining. And it works for most of the food lovers but not for everybody. For those who like to safe and comfortable at a dinner this kitchen might have too many surprises. You have to ready for adventure here. We really hope he can keep up with this speed of creativeness because it is not so easy. The place deserve a Michelin star and the most enjoyable fine dining in today’s Hungary.

We have to say some words about wine too. They have a hand picked selection of good Hungarian and some international wines. The knowledge of the sommelier is impressive and the number of wines they sell by the glass is very good too.
Prices are reasonable you can get a 4 course menu for 13.000 Ft/43 Euro which is perfect for this quality. Wine selection is a bit weak in the lower price range. If they have to change something it to include some lower priced good quality wines. We could say it is not their fault. Unlike in Italy in Hungary the restaurant wine prices are generally too high and most of the time missing wines in the lower price range. This somehow should change in Hungary.